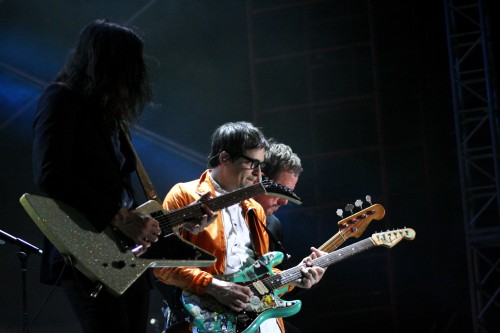 Check out  my blog post on the 2017 festival’s first day to read more about the performances of Canadian folk-rockers The Strumbellas, rap legend Snoop Dogg and alt-rock veterans Weezers. 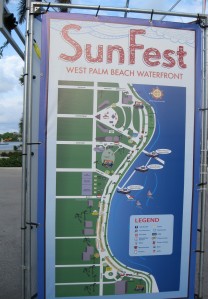 Sign display of the Sunfest map. Photo by Empress K of Reggae Reflections

Even though this wasn’t one of the days for which I had a  photo pass, I did manage to take a few notes and post a review of festival opener Counting Crows to the Type M blog, The Music Type.

The second night of the festival was about rap performers young and old, and a jazz legend.

Didn’t see much of the music this evening as I was too busy sweating my way through a beautiful road course along the Intracoastal, Hey Sunfest, I know you’re looking for the dramatic ending, where the runners finish the race by entering the festival in early-evening full swing. But having a 5K race in South Florida in May start at 5:00 p.m. is just brutal. Especially when you had such few water stations along the way. So between running the race (slower than normal) and recovering from it (including showering at a Clematis St. gym), I didn’t get much time to take in the music acts. Other than a couple of songs by Creed, who didn’t do it for either Empress K or myself. So that was basically an early Sunfest evening.

Started Sunfest Saturday mid-afternoon for the  reggae double-header of SOJA from D.C. and Michael Franti & Spearhead from San Francisco.  Then after a couple hours respite in Clematis and CityPlace, it was back into the festival for classic rockers Joan Jett & The Blackhearts, followed by pop-rock headliner Third Eye Blind.

On the final day of the festival, Empress K and I took in a little bit of everything. Another mid-afternoon start, this time for the Latin hip-hop of Miami native Pitbull. After a few hours escape to newly-opened casual seafood eatery Tinfish, we went back in for a sampling of the classic-rock of Foreigner, followed by the peaceful reggae of Hebrew artist Matisyahu and the piano-driven rock of The Fray.